Pastel storage walls curve and dip through the rooms of this apartment in London's Marylebone neighbourhood, which has been overhauled by architecture studio Jonathan Tuckey Design.

The apartment is situated along Upper Wimpole Street, occupying the ground floor of a Regency-era townhouse that had a rather poor internal layout and limited storage space.

"[The apartment] was split linearly and devoid of any sense of hierarchy or public/private spaces," Jonathan Tuckey Design told Dezeen. "The bedroom spilled from the communal hall and was completely visible from the main street and front door."

The lack of storage also meant its owners were unable to hide away the "untidiness of everyday life".

Instead of fitting standard shelves and cupboards, the studio set out to fashion built-in furniture in the form of MDF storage walls, which would be able to comfortably accommodate the inhabitants' breadth of belongings.

By constructing these deep-set storage walls, Tuckey and his team also hoped it would create intricate "rooms within rooms", a concept they had become interested in by looking at American architect Louis Kahn's studies of Scottish castles. Kahn observed how ancillary rooms for servants were often built around main living spaces, set into the castles thick outer walls.

In the two works, the saint and other biblical figures are depicted standing inside green and pink rooms that feature a series of soaring archways.

"These works helped conceptualise the joinery pieces as an internal architecture, housed within the larger volume of the building," the studio explained.

"They were designed with the ambition of being able to subdivide spaces but also create a relationship with the vertical proportions of the rooms."

In keeping with Giovanni's colour palette, Jonathan Tuckey Design has created a pale-pink storage wall in the apartment's living room.

It is inbuilt with flush cupboards, glass-fronted cabinets and a couple of arched niches where small trinkets can be displayed. There's also a decorative golden strip running along the walls upper edge, along with few brass spotlights.

The wall winds up and around an existing marble fireplace before dipping into a short corridor, where the floor has been clad with a striking mix of black and white triangular tiles.

Inhabitants are lead through to a small antechamber. Storage walls here are pistachio green and include open shelves. A tall arched doorway grants access to the master bedroom proper, which has been finished with matching green side tables and a huge bed with an emerald-coloured headboard.

The apartment's pastel scheme takes a detour in the study, where the MDF joinery is stained in a natural wood colour. One of this room's walls has also been inset with navy-blue panelling.

Photography is by Ståle Eriksen. 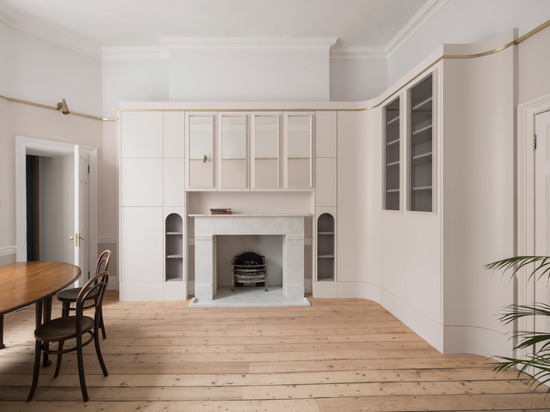 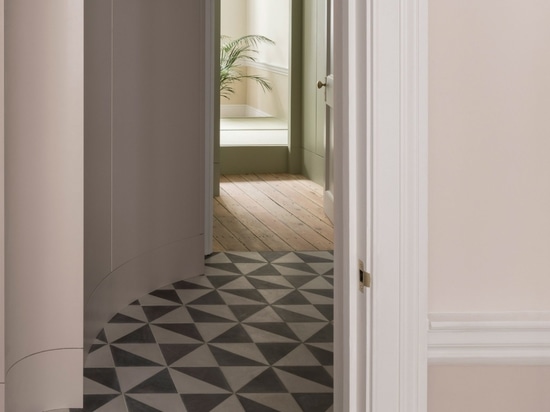 Inhabitants are guided through a tiled corridor 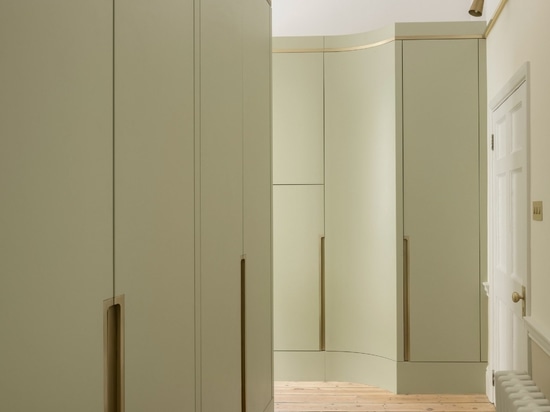 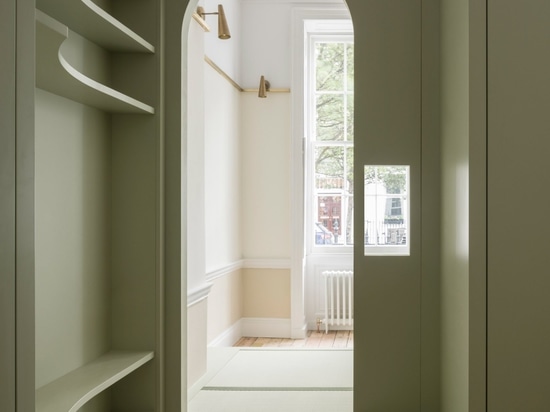 An arched doorway looks through to the master bedroom 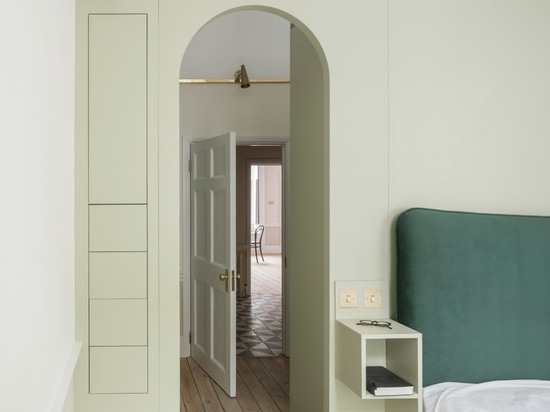 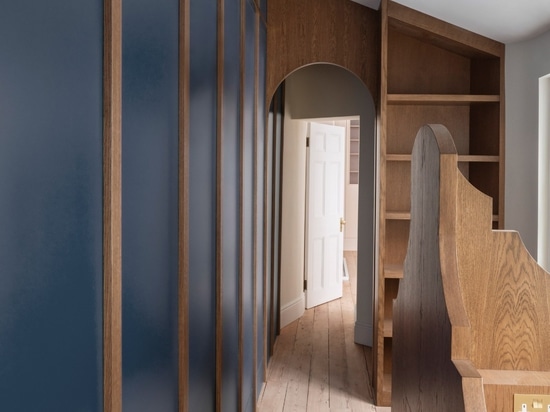