Background: rural revitalization. Due to the unique tidal flat landform, Gulou in Jiangmen City established the tradition of making use of the water system to dig ponds and form mounds for fishing and farming.

As the water system and fish ponds occupy a large area and form a fragmented spatial pattern in local villages, many bridges have been built to connect the areas segmented by water. With rapid urbanization in the Guangdong-Hong Kong-Macao Greater Bay Area, many local villagers have abandoned the traditional fishing lifestyle in favor of living a more urban life. For this reason, water villages in which people make a living by fishing have been gradually disappearing. Gulou Waterfront is an eco-cultural tourism resort developed by OCT in the context of rural revitalization, aiming to combine rural development with the cultural background of local villages on the premise of preserving the unique spatial fabrics featuring mounds and ponds. The resort maintains the form of the basic local water system while organically integrating nature education, parent-child recreation, and fishing & husbandry activities. Those operations in the resort require several bridges in certain areas, to facilitate the movement of people and fishing boats.

Arched wooden bridge. During the fishing civilization period, roads were poorly developed, so water systems became the key route for transportation and logistics. Since bridges need to be walkable while also ensuring more space for boats underneath to pass through, traditional bridge construction techniques in China adopted "arches" to create space for the passage of boats under bridges, and enhance the effectiveness of the structure. Due to the abundance of woods, Southern China has the tradition of applying timber to build bridges.

This project is a timber bridge, which is one of the many in Gulou Waterfront Resort. To differentiate it from urban constructions and revitalize traditional rural culture, LUO studio adopted natural wooden materials to construct an arched bridge. The resort provides access for small fishing vessels, as well as large tour ships. To enable boats of various sizes to pass under the bridge smoothly, the load-bearing platform at the bottom of the arch which is 1.35m higher than the normal water level, combined with the 2.8m arched structure, forms a space more than 4m higher than the normal water level. This meets the clearance requirements for large tour boats to pass through. Based on geological surveys, the span of the bridge is set at 25.2m. Through structural calculation and construction analysis, LUO studio utilized 3 large curved beams as main structural components, which are arranged in a parallel manner with a 2.8 spacing between each other. With full consideration of manufacturing and transportation costs, each main beam was divided into three sections at appropriate positions, connected and assembled by steel-strengthened bolts on the site, to form the complete wooden beam.

Set covered corridor on the bridge. The ridge is located in the joint area between a dense traditional commercial street area and a children's recreation area. LUO studio created a relatively "closed" corridor space on the timber bridge, which is different from other open landscape bridges in the resort. The aims were to accentuate the transition from the "practical" commercial street area to the relatively "dreamy" children's recreation area, allowing visitors to feel a sense of ceremony in the moving process.

Constructing a covered corridor on bridges has been an old tradition that dates back to the Spring and Autumn Period and the Warring States Period. The initial intention was to strengthen the bridge structure, resist rain and moisture, keep the wood dry and prevent it from corrosion. This project also inherits the construction wisdom of ancient covered bridges. The covered corridor enhances the overall structural stability and protects the arched wooden structure beneath from exposure to sun and rain. The west area of the Pearl River Delta where the timer bridge is located has abundant rainfall, so the corridor was constructed in a relatively closed form. The exterior of the corridor space is covered by layers of metal plates, which effectively protect it from rain and also create a sense of cohesion for the space.

The plane of the bridge's roof is a complete rectangle. The top, left, right edges of the bridge's side facades also consist of rectangular silhouettes, while only the lower edge is a natural curve. This generates height variations of the corridor space that is higher on the two sides and lower in the middle. To ensure the structural stability of the covered corridor space, the design team set horizontal connecting rods in the middle section and added two viewing platforms on either side, which also avoid the monotonous feeling when viewing the corridor space from the entrance and exit. The small-section sub-structural system not only enhances the sense of structure in the corridor space but also reveals the elaborate craftsmanship and details to visitors on tour boats and offers them a unique visual experience.

Construction modules & material specifications. The small-scale wooden components are arranged with small spacing in between. The spacing between neighboring substructures is set at 1,000mm equally. This perfectly matches the scales of the steps and metal exteriors. Between neighboring sub-beams, three steps are set at the steep sections of the arch, while two steps are set at the gentle sections. The length of each external metal plate is controlled at about 900mm, which is appropriate for manufacturing, transporting, and installation. The 900mm length of timber frames also provides a suitable space for a single person to stand, lean, and rest.

Top light, side, and bottom gaps. The neighboring upper and lower steps of the corridor have a clearance of 70mm. A gap of about 200mm is set in between layered metal plates on the exteriors of the corridor space. A 1,500mm-wide daylighting belt is set at the middle of the corridor roof. When walking slowly into the corridor space from the entrances at both ends, visitors can catch the sparkling water under the bridge through the narrow gaps between steps. As they continue to climb the bridge, the bright light refracted by the upper and lower metal plates attract them to look out through the side gaps. Such a special “collected” viewing experience distinguishes this timber bridge from other open bridges. While passing through the platforms from two ends to reach the center of the bridge corridor, visitors can fully experience the light and shadows from the top, feeling calmness and openness in the mind. Such design forms a continuous spatial rhythm that gradually reaches the climax.

Industrialization and handwork. The materials utilized were manufactured and processed by factories based on industrialization standards, and all the necessary timber and metal components were treated by modern industrial technology and methods. During the installation and construction, only the three main beams were hoisted by large machinery. All other follow-up construction steps were fully adaptable and transportable through the hands of the workers in response to the local context. The whole construction process not only effectively harmonized with the surrounding construction sites and took advantage of efficient industrialized methods, but also conveyed rural warmth as well as the “localization” of construction. 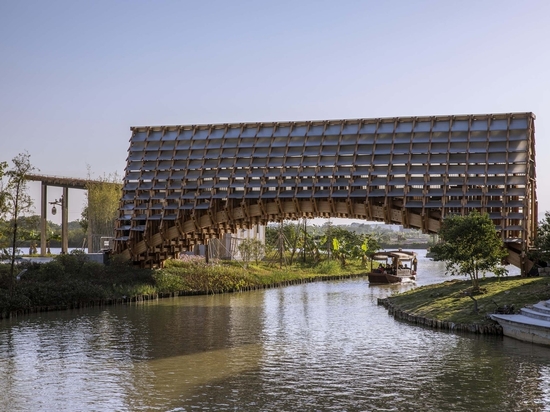 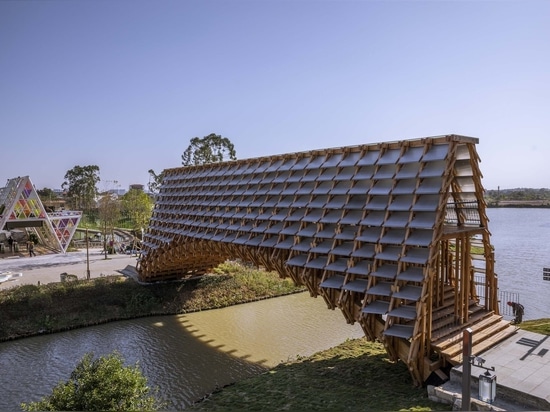 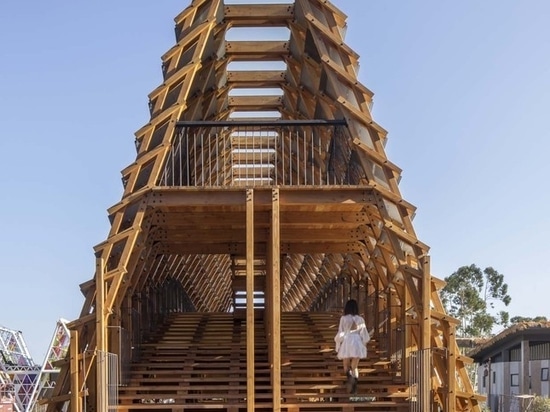 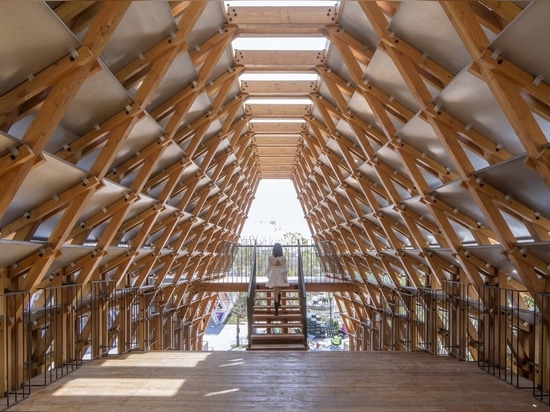 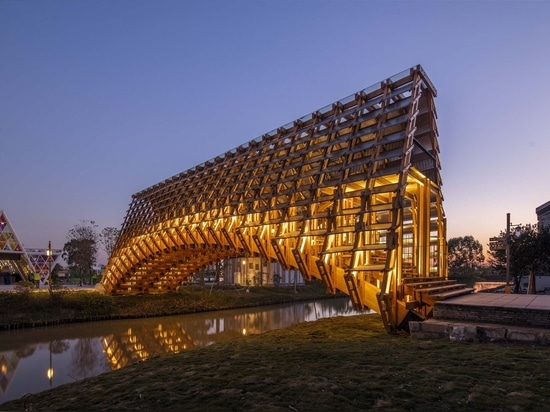 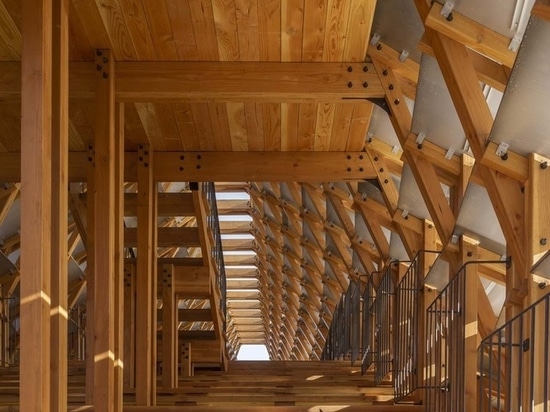