Inspired by legendary Berlin department store architecture, Max Dudler has redesigned the facades for the northern part of the Tegel Quartier.

With two staggered tower superstructures and the motif of cascading facade pilasters, the architecture becomes a new focus of attraction for this revitalized pedestrian zone. The project, commissioned by HGHI Holding GmbH, is part of an undertaking that redefines Gorkistrasse – set at the heart of Berlin’s Reinickendorf district – as an urban shopping street. The entire project will reach completion this year, including the southern part, also designed by Max Dudler. Circa two-thirds of the new shops have already opened. The Rautenbach and Pechtold architecture offices have been commissioned with the planning and execution of the interiors.

Tegel Quartier Nord is a component of comprehensive modernization and expansion of the circa 250-meter long pedestrian zone is known as Gorkistrasse, which includes the former Tegel Shopping Center, the former Hertie Department Store, and the Tegel Market Hall, so steeped in tradition. In collaboration with HGHI, the project’s aim was to revitalize this historic pedestrian zone and to reinvest stationary retail in Tegel with new attractiveness. At the same time, such an upgrade of a building from the 1970s represents a prototypical architectural task with regard to ‘sustainability.’

The new Galeria-Kaufhaus in the northern section is reminiscent of the legendary, now defunct facade of the Karstadt Building on Hermannplatz. The northern portion of the Tegel Quartier is configured as an ensemble of separate addresses: this lively, varied architecture, whose details fascinate passersby day and night, is nonetheless traceable to a unified design concept. Here is a genuinely high-quality, durable, and exceedingly memorable architecture.

The facade of the northern section – which has received a completely new design – has for the most part been attached to the preexisting architectural substance, and newly constructed only in part. By filling in the triangular ‘residual areas’ along Buddestrasse, the building’s form – which dates from the 1970s – again approximates the urban street alignments of the 19th century. The deep, lively facade relief, with its vertical structure, draws the attention of passersby, functioning as a decelerating element to slow the gait.

Two tall, newly-defined highpoints atop the Karstadt Building awakens curiosity and function as attractors. The powerful material and color contrasts of the high-quality, natural stone facade (pale limestone, green granite, gray shell limestone) articulate and rhythmics the ensemble optically into smaller sections that allude to historical subdivisions. The facade design is animated by the tension between the repetition of identical elements and their continually new and surprising application. The eaves' heights rise and fall in harmony with neighboring buildings.

The various utilizations brought together here – including an office high-rise and a parking garage – remain legible through modulations in the facade motifs which correspond to the respective theme. Along Gorkistrasse, the ground floor zone is opened up by numerous entrances on varied scales. The result is a lively shopping locale with a multitude of attractive offerings. A genuine piece of urban life.

The cascading design of the natural stone facade, with its staggered elements measuring up to 45 cm in depth, was executed using numerous solid elements and is arguably unique by virtue of its form and exceptional quality. Vertically, groups of three stone elements were assembled using compression joints, producing a notably homogenous look. Another special feature is the execution of the fixed glass display windows. A (dismountable) frame in natural stone conceals the post-and-beam construction lying behind, leaving glass and stone as the only visible materials. 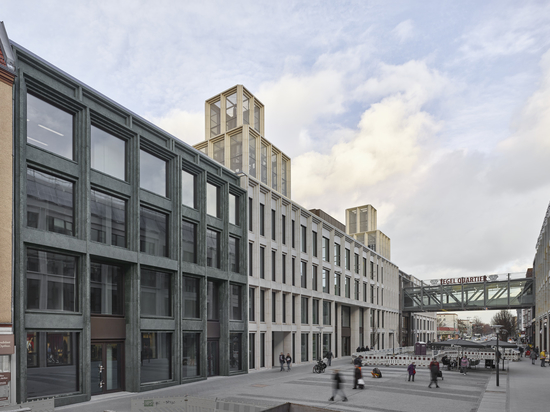 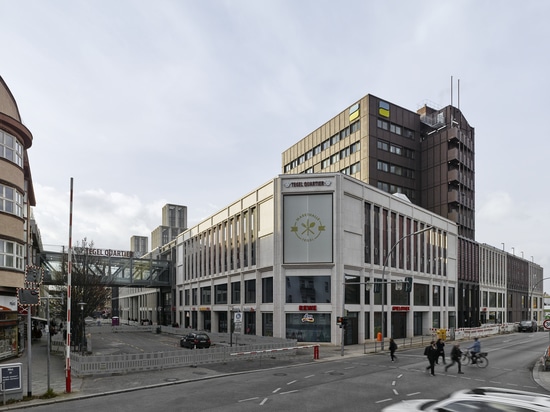 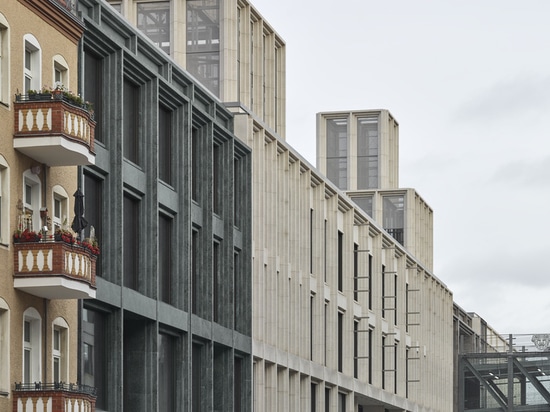 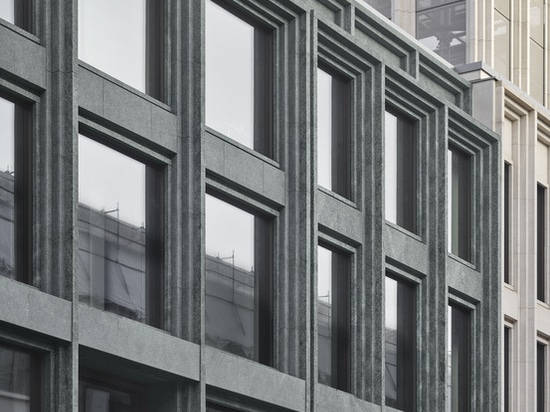 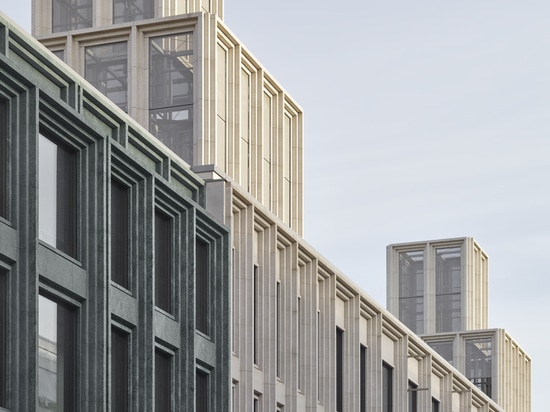