Stepped red-brick volumes and garden terraces define this home that Pad Studio has created in the New Forest, an area of protected woodland in the English county of Hampshire.

Called Gardener's Cottage in reference to a structure that formerly occupied the site, the house is designed to appear as though it is "organically rising out of the ground" while echoing the traditional architecture in the nearby village.

Its owner, who had been living in a six-bedroom manor house on the site but decided to downsize, approached Pad Studio to design a compact and low-energy 143-square-metre home on the adjacent plot.

Gardener's Cottage comprises three brick forms around a sunken, stepped patio space, which is surrounded by a low brick wall with built-in planters containing plants retained from the existing site.

"The relationship with the landscape has been at the fore of our thinking at Gardener's Cottage," said Pad Studio director Wendy Perring.

"We were seamlessly aligned with our clients' desire to preserve natural biodiversity on the site, viewing the construction process as an opportunity to build a timeless home that respects its surroundings and will last for years to come," Perring continued.

Positioned at the centre of the site, the main home forms an L-shape with a large living, dining and kitchen space. This room overlooks the central patio through tall windows and is further illuminated by clerestory glazing.

To the west on the opposite side of the patio is an annexe, which provides an additional living unit for extended family or guests. To the east, another separate volume houses a workshop and utility room.

Each of these forms is topped by a flat zinc roof with a large overhang, preventing overheating in south-facing areas and creating covered veranda-like spaces that have a close relationship to the garden.

"A zinc roof steps upwards in line with the slope of the site, creating the feeling of something organically rising out of the ground," said the studio.

Both inside and out of Gardener's Cottage, spaces are defined by the slim red Vande Moortel bricks, chosen to give the home a "natural yet crafted" feel while meeting strict planning requirements in the area.

Internally, this brickwork is contrasted by areas of white plaster and exposed glulam ceilings, alongside simple and natural details and furnishings.

The environmental strategy for the Gardener's Cottage includes a ground source heat pump and triple-glazed windows, as well as photovoltaic panels on the home's roofs.

Pad Studio was founded in Hampshire in 2013 by Perring and has completed numerous projects in the surrounding county. Recent examples include a house clad with timber reclaimed from an old barn and a prefabricated home that is technically a caravan to comply with planning regulations in a stretch of protected woodland in the New Forest. 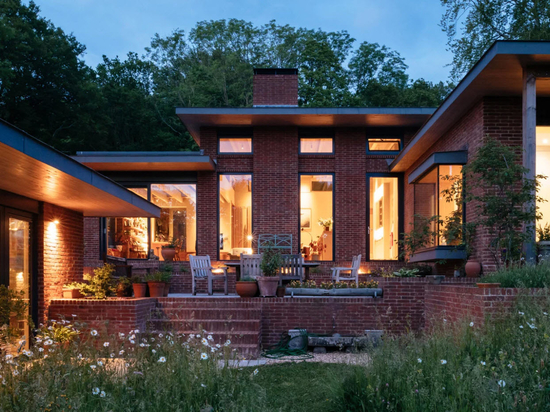 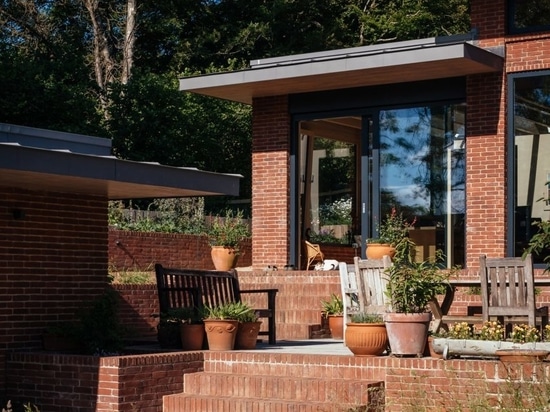 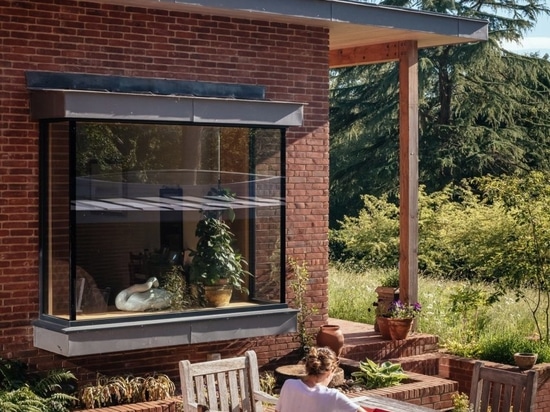 The red brick building comprises a number of stepped terraces 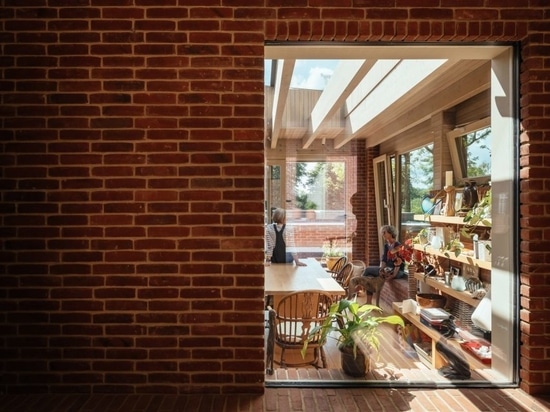 The home was designed around the landscape 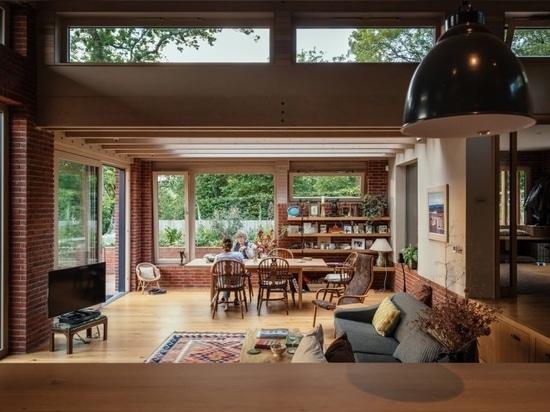 An open-plan living area features inside