It is a space inspired in the essence of ancient Mexican traditions, translated into a contemporary language.

SAMA and mob planned interiors to be conformed by a playful selection of various materials, which altogether permeate and emphasize each of the different areas in the restaurant. The main entrance welcomes us with a unique hallway, made up by a fixing of more than 11,000 custom clay tiles, made by hand in the state of Oaxaca by a group of Oaxacan women in “El Alacrán” ceramics workshop, run by Mexican artist and sculptor Adan Paredes.

The tiles were strategically designed in order to fit into the curved walls along the corridor, thus generating a transitional space between the hotel’s foyer and the restaurant’s lobby. As the scents from the dishes and mezcal arise, a mural art piece consisting of kaleidoscopic digital mosaics greets the customers.

This piece was made by visual artist Ignacio Rodríguez Bach and presents a series of images representative of the Chapultepec area, where the restaurant is located. Chapulín (chapulines in plural) is the Mexican name for a local species of grasshopper, and Chapultepec means “hill of the chapulines” in Nahuatl, the most prominent ancient Mexican native language which

Finishes in wood and wicker weaving, geometric accents and basketry elements are some of the details that dress up the diner lounge. The bar area can be easily reached from the lobby, and is characterized by the use of cold appearance materials such as marble, granite and glass; wich in contrast with the wooden wall panels and suspended ceiling, bring back to life the elegance of old colonial times in Mexico.

Aside this space, visitors can enjoy the dining area which is conformed by a series of tables and chairs designed exclusively for the project by mob studio: leather upholstered stools, chairs with wicker weaved backrests and geometric pattern decorated surfaces inspired by pre-Columbian cultures.

As mob specializes in interior architecture and furniture design, all pieces of furniture were made by master craftsmen to achieve a comprehensive and coherent look within the space. Being the most spacious, the dining area is at a time divided in two different spaces: terrace and inner lounge, both having the magnificent sight of Chapultepec forest as landscape, through a

large permeable window that allows for natural ventilation and sunlight access, thanks to its folding system.

Located in the left end of the complex there is a private room specially destined for the Chef. Its vaulted ceiling is covered with a patterned arrangement of black and white glazed ceramic tiling, which is continued along the walls up to the kitchen limits.

This room was created for the diners to savor the Chef’s delicacies directly, establishing a

more personal relation. In the opposite side, the space is extended into an exclusive private dining room, with all the necessary amenities to host intimate events. In the middle of the room, a wide dining table that accommodates 25 people is found. Motifs alluding to the shapes of pre-Hispanic pyramids are repeated in the ceiling and on the far side of this area, there is a small living room from where the terrace and reflecting pool can be reached.

At last but not of least importance, next to the entrance hall the wine cellar is located. This space was particularly designed to house the wide variety of wine and mezcal brands offered in the restaurant; for this, wooden shelvings were built throughout the walls. In the center of the room there is a special furniture set made up by a display cabinet and a hanging luminaire that descends from the ceiling, showcasing a selection of the most luxurious wines.

Chapulín is a restaurant that brings together Mexican tradition and refined culinary taste, an experience meant to stimulate all senses. 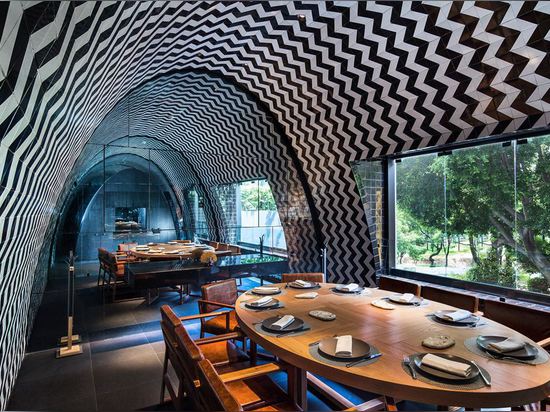 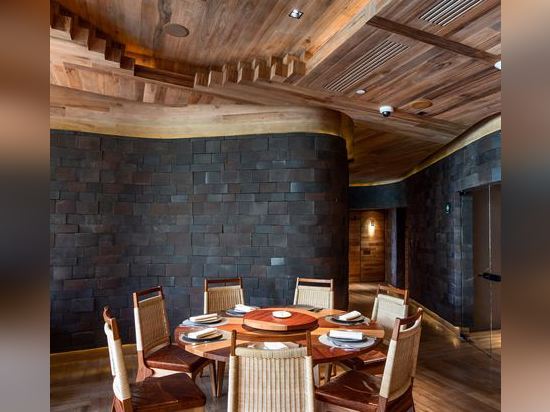 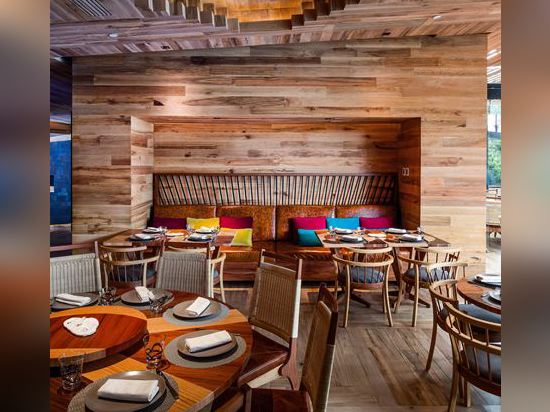 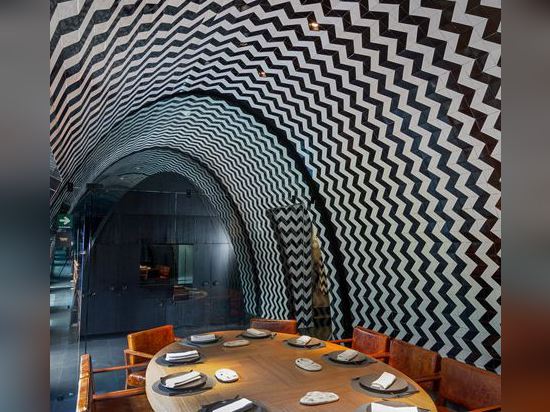 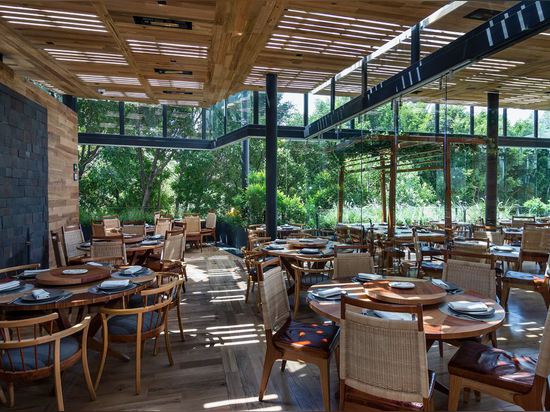 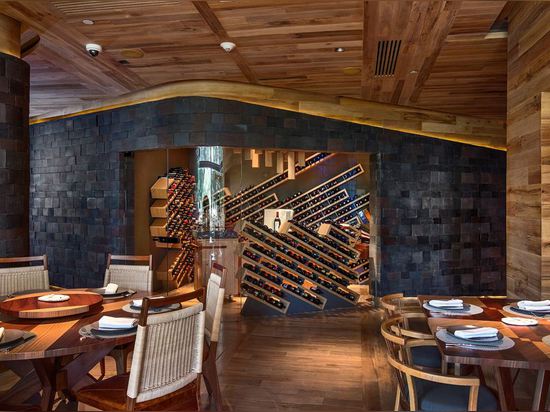