Located in Haimen District of Nantong City, Changle Town is the hometown of Zhang Jian (1853-1926), a critical industrialist, political leader, and educator in the late Qing Dynasty and the early Republic of China. The cultural tourism project developed by ZOINA Group, intended to renovate the old center of Changle under the spirit of Zhang Jian and renamed it as Jianli (the Hometown of Zhang Jian).

GOA undertook the masterplan and design of the whole project, where Jianli Art Center acts as the gateway of the old main street, the core of the whole project. The main street of Old Changle is built during the reign of Emperor Qianlong. Paved with grey stone slabs, it extends more than 300 meters from east to west, and the art center sits at the east end.

Adjoining the art center is the old Changle Town Supply and Marketing Cooperative on the north, a century-old wooden building under preservation. Regarding the site, the design starts by answering the question of how to place a new cultural tourism construction within the local context of a small-volume historical building to carry on Zhang Jian’s spirit of “eradicating the old and fostering the new” while arousing a sense of cultural belonging.

Inspiration from the “House Surrounded by Moats”

Jianli Art Center is built by the water, drawing on the dwelling prototype “house surrounded by moats,” peculiar to the Chongming-Qidong-Haimen region on the north bank of the estuary of the Yangtze River. Affected by the low-lying and sandy geographical condition, local people use to build high foundations and dig moats by houses to collect soil. Usually, the moat is located on the south of the house.

When it is around the house, this dwelling form is called the “house surrounded by moats”. The dwelling form of the “house surrounded by moats” reflects the wisdom of the traditional farming culture. A moat provides water for drinking, washing, irrigation, and firefighting while serving as the house guard. A small bridge in front of the house becomes the entering path. Although the sandbank landscape has changed along rural modernization, the moats around houses and the small bridges are generally preserved in local homes as a precious mark of traditions.

As a continuation of the “moat” idea, the project retained the surrounding water system and placed new bridges on the south and east of the art center to connect the site with spaces across the water. By respecting the scale of the existing wooden architecture and designing a sandbank landscape composed by green plants and water features, the new art center continues the traditional spatial layout, creating a dialog between itself and the local culture.

The art center features an steel structure system. Columns are concealed in curtain wall’s vertical bracings, forming an open indoor space. A narrow courtyard at the intersection of core functional spaces allows sunlight and garden views to the interior. The glass and walls are placed between each other along the edge, blending the boundary of the interior and introducing vibrant lights and shifting shadows.

The decentralization and deconstruction strategy endows the architecture with a contemporary spirit, thus creates an iconic cultural image. One whole architecture form is decentralized into four individual venues to minimize the volume contrast between the new art center and the existing wooden construction. The canopy is deconstructed from a traditional roof into four hyperbolic pieces to interpret the tradition with a modern language, with low cornice echoing the scale of the existing construction.

Each of it tilts towards the center, reaching a 15-meter-height at the peak to provide adequate vertical spaces for the indoor exhibition area. The roof extends from the center to different directions. The deconstructed roof correspond to different functional zones: lobby, preface hall, exhibition hall, and service zone. An asymmetrical windmill-shaped cluster is formed, adding asymmetrical rhythm and dynamics of modern language within the symmetrical structure of traditional architecture.

The art center’s double-layer eaves are consistent with those ones of the old wooden building of the Supply and Marketing Cooperative on the north side to harmonize the volume of the new and old. In the exhibition hall, an open slope rises gradually from east to west. The pure white ceiling steps in a progressive way, not only creating a strong sense of order but also guiding visitors according to the sequence of visits. The spatial form perfectly integrated with the exhibits, presenting the beauty of art.

Hyperboloid as a System

The canopy design applies a hyperboloid numerical logic for efficient construction control. The transverse and longitudinal beams are positive arcs following the same radian and shape. Four hyperbolic canopies use 3D modeling as a design method to control the precise positioning of the spherical construction. The structure of the roof is designed as a cavity in the shape of an “air pillow” to create a sense of lightness. Each piece of canopy is thick in the middle and thin at the edges.

The 500mm thick steel beam structure is hidden inside the structure, with thin cornice, forming a slender and graceful arc at the eave. The natural wood veneer resin ceiling panel is divided into modules in parameterization software. The curved ceiling panel extends from the interior to the exterior, blending the boundary of the open space. When the 15m wide folding door of the exhibition hall is fully opened, the indoor scenarios integrate with outdoor landscapes.

Historic buildings’ preservation and revitalization need to integrate new forms of business to create new topics and inspire new vitality, and to build a vibrant and sustainable urban space under the rapid development of society. Adopting contemporary materials and design strategies, the project carrys on Zhang Jian’s pioneering spirit of “eradicating the old and fostering the new”, allows a new cultural exchange center the local, and improves the urban development of Haimen in Nantong. Source by GOA 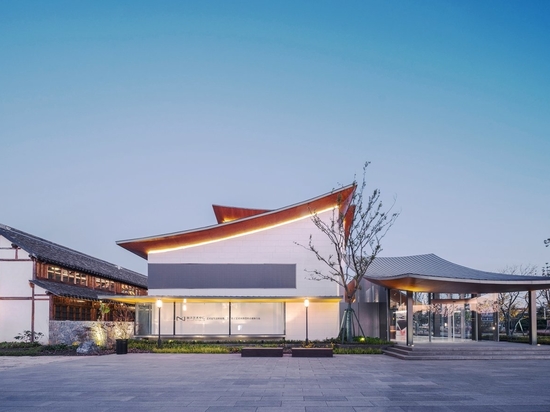 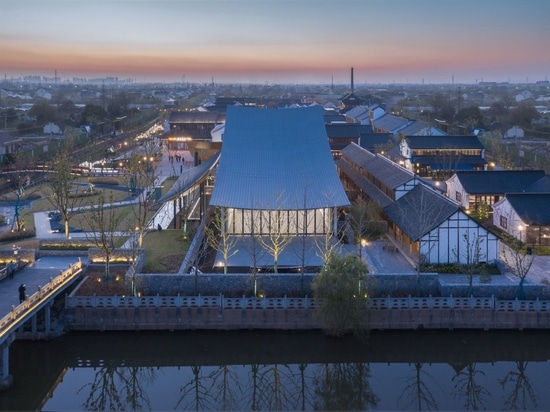 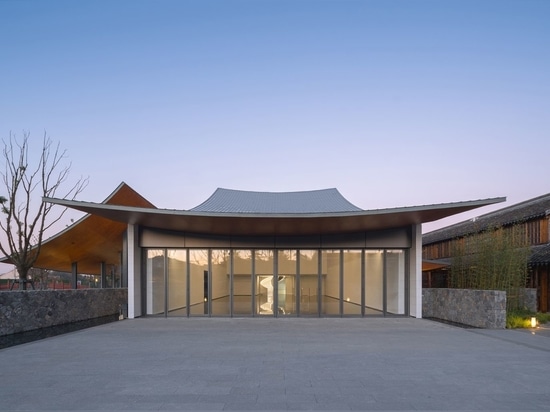 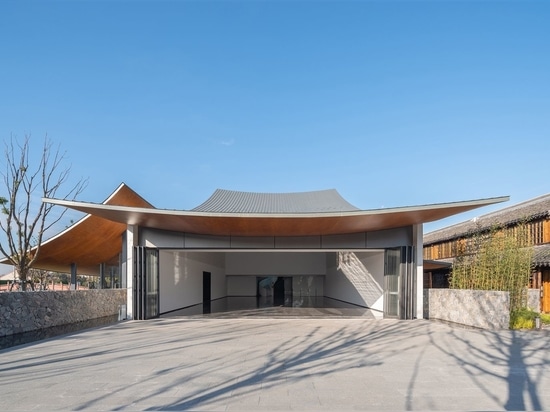 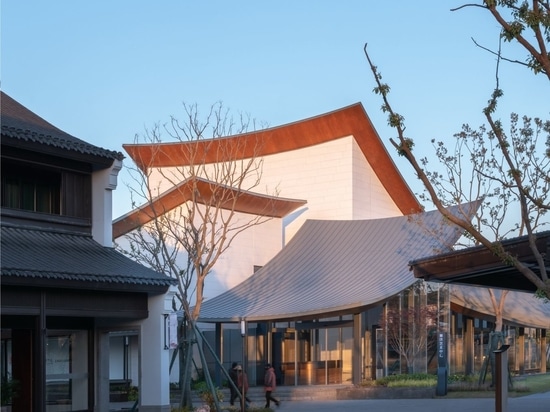 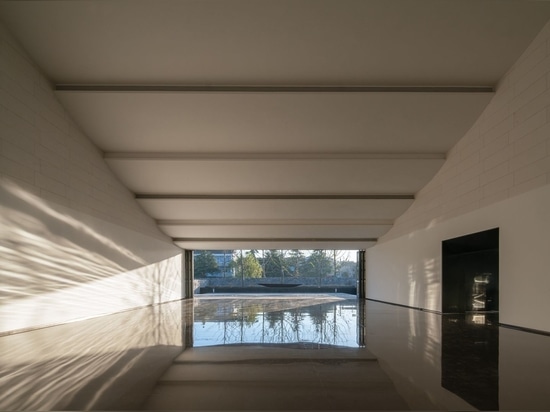