In Noosa Heads, a tired suburban house is resourcefully remade into a robust but welcoming retreat that emphasizes the simple pleasures of a holiday home by the coast.

Built during a period of national self-reflection, as Australia marked 200 years since the start of colonization, the existing house on this site in Noosa Heads is representative of popular suburban housing of the 1980s – complete with faux colonial details of finials decorating a multi-gabled roof, ornate balusters, and planning moves made by the flip of a 45-degree set square. The design appears caught between making a conservative nod to traditional building forms and an aspirational stride toward a uniquely Australian style of contemporary building. Thankfully, the architecture practice engaged for the renovation, Vokes and Peters, didn’t bother to get bogged down in this sentimental stylistic play from four decades ago. Instead, Vokes and Peters accepted what was working well with the pragmatics of the house, discarded the elements that were trivial, and revelled in its implied technical constraints and spatial opportunities.

The cross-section of the house, with half-level transitions between the main living space and the bedrooms above and below it, provided Vokes and Peters with a cue to latent spatial qualities that had been muddled with the details and affectations of another era. The Raumplan, a design principle of modernist Viennese architect Adolf Loos, is an alternate historical precedent that inspired the renovation. The Raumplan favours the organization of rooms as volumes rather than through two-dimensional plans and sections, and this concept has shaped the interior reworking of the house. Instead of focusing on how the house might signal a message of quaint domesticity to passers-by, Vokes and Peters directed its attention to the experiences of shared holidays and social occasions.

In emphasizing the informalities of a holiday house, where groups of people enjoy relaxing in each other’s company, the new design has unravelled the pretensions of the suburban house. Walking through the front door, you arrive in the kitchen, which functions as the primary room of the house. With a dining table and small sitting area, it works particularly well in welcoming and supporting most social activities. A variety of interconnected rooms make it possible for guests to retire from togetherness while remaining connected. Thick storage walls separate the main room from the rest of the house, and are punctured by discrete and evocatively performative openings that link the upper and lower living areas, allowing activities or conversations that seemed far-off to be glimpsed or overheard.

The existing plasterboard interior shell is largely intact, except for centrally located areas of clear-sealed plywood joinery and linings. The colouration and visual texture of the plywood, riffing with those of the existing timber floors, provide a welcome sensuousness to the rooms. A simple bird’s mouth detail, where box sections of plywood joinery meet, offers one of the few gestures of craft in lieu of the previous tawdry embellishments.

The refurbishment to the front of the house isn’t inspired by cricket, although the screen that wraps the front of the house functions in a similar way to the structures that you find at a cricket ground. Like a cricket sight-screen, in both material and purpose, this white timber-batten structure is constructed in front of, and obscures, the existing brick-veneer and gabled building. Rather than enhancing the appearance of a red-leather ball in a field of play, Vokes and Peters’s screen visually and climatically shields the house. Facing west, the screen contains a comfortable set of spaces to reside in, moderating the western sun and creating privacy to the street while also improving the comfort and ambience of the existing rooms behind.

To stretch the cricketing metaphor a little further, the house demonstrates a physical and conceptual likeness to the scoreboard. Rather than treating the project as a knock-down and rebuild, Vokes and Peters acknowledged that the existing house already had “runs on the board” (my words, not theirs). And like a traditional cricket scoreboard, where you could see people inside changing out the numbers while also watching the game through vacant panels, the new screen has framed openings where people can be seen occupying the novel structure and gazing out to the view beyond.

Noosa Heads House is relatively big by holiday house standards, but has a modest quality to it. Through the simplicity of the chosen building materials and the effort to simply improve what was already there, it expresses an old-fashioned ethic of “making do,” albeit in a sophisticated manner. There is also an awkwardness in this ethic, but rather than being regrettable, it is curiously charming. As you approach the side of the house from the street, the existing gables poke into view from behind the screen, offering a welcome but unexpected quirk that is common to the informal and hodgepodge aesthetic of many holiday houses. Like the shelves within the house, the renovated house is a sort of repository for collecting stuff of interest and for holiday entertainment. And, as Vokes and Peters would have it, a thoroughly enjoyable place to enjoy Cokes and pizzas.

Battens and pendants by Clipsal in ‘Black’.

Noosa Heads House is built on the land of the Gubbi Gubbi people. 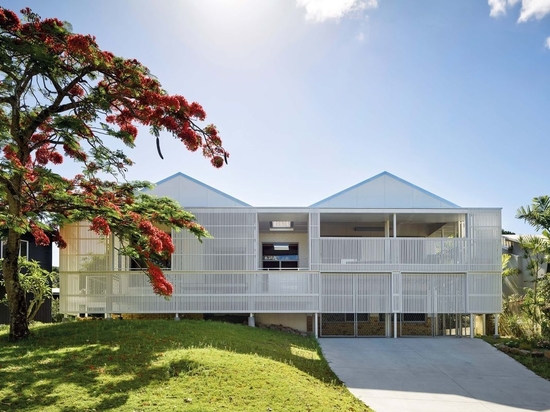 The project reworks a 1980s house, transforming the appearance of the existing brick-veneer structure. 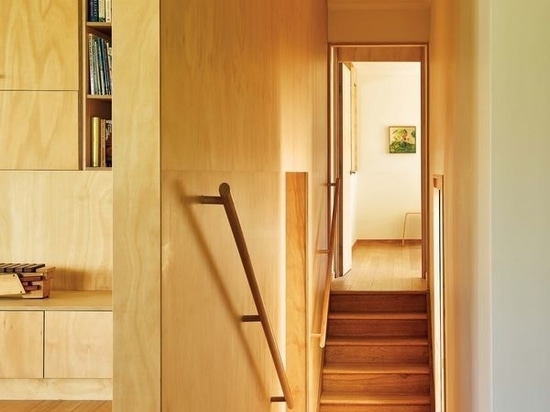 The reworking has capitalized on level changes in the existing plan. 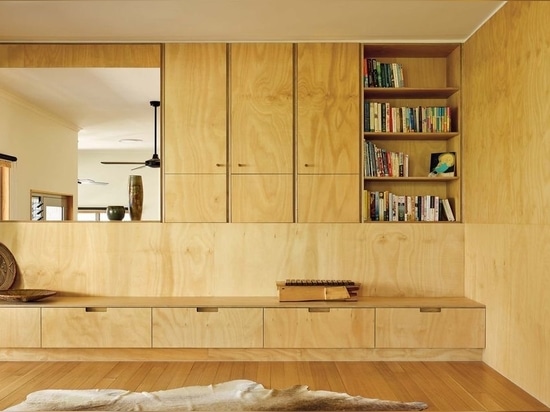 A central section of plywood joinery and linings adds tactility. 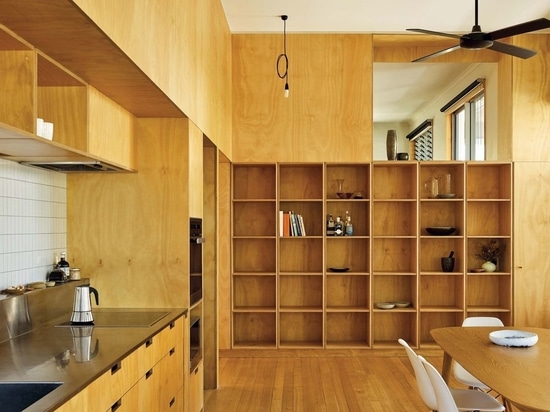 Openings in the walls provide visual and aural links between rooms. 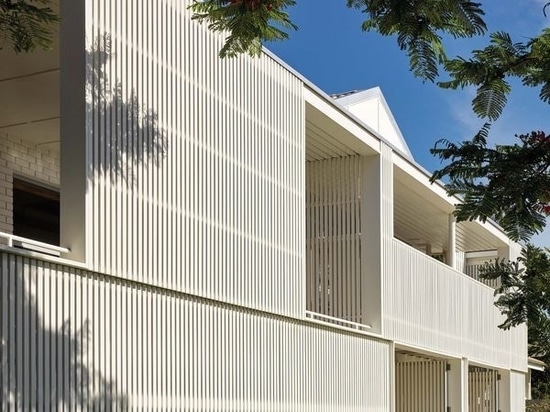 A screen of vertical timber battens visually and climatically shields the existing house. 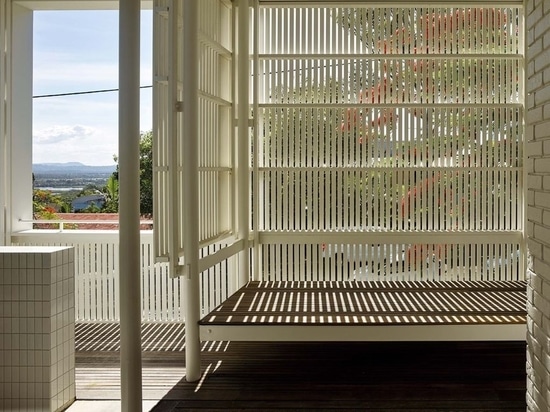 Benchseats encourage an informal occupation of the deck.