Wutopia Lab has been commissioned by Sino-Ocean Group to create a monologue art museum on the park green of SEATOPIA in Beidaihe, Qinhuangdao, dedicated to an infinite minority of people who want to be free from the worldly distractions. It was completed and opened to public in July 2022.

The Monologue Museum is a slowly unfolding hand scroll. Starting from the small entrance theater where the light breaks through the corners, entering the art gallery, the quiet water courtyard slowly reveals itself along the open corridor with shifting lights, passing through the colorful yoga room to the bright art gallery (exhibition and painting rooms). Then the light fades, the path gets narrower, and you almost miss the tearoom hidden behind the wall.

Monologue Art Museum is a multi-function space. It allows different people to be in different spaces at the same time, but one can be alone in an artistic way. The plan is complex and irregular, and the structural design is not conducive to earthquake resistance. However, when the museum is divided, except for the art gallery, the rectangular dance studio, the circular yoga studio and the oval theater are all symmetrical and regular with excellent seismic performance.

In this regard, Lao Hu (structural engineer) set up three seismic joints to divide them into four independent structural units. The expansion and deformation of the extra-long structure was released, reducing the heat stress, and avoiding structural cracks caused by temperature changes. Having to accept the seismic joints, I had to carefully design the nodes to conceal their presence on the roof, façade, and interior to ensure that my painting is visually continuous.

Still the Way Back Then

I cut a curved skylight above the back of the stage to allow daylight or moonlight to spill down like a waterfall, “There is a crack in everything, that’s how the light gets in.” Separated from the main steel structure, the small theater is shaped by a continuous closure of the reinforced concrete wall panel structure, an elliptical column standing on the pool. The inside is noisy while the outside is quiet.

The point is the yoga room, the dried brush is the flower wall, the art gallery is the stroke that connects these, the thin and somewhat fast is the corridor with a nib, then it leans to become a side peak forming a slow thick line, the enlarged art museum, then the dance studio is a stroke slowly back to the nib. At the beginning the art gallery and the art museum are closed on the outside and open on the inside to the water courtyard, while after that it is closed on the inside and open on the outside to the large landscape, which resembles how the pen moves.

I designed the dance studio at the Monologue as a translucent glass box, with enough light but filtering out the outdoor scenery as a backdrop. Behind the mirrored wall of the classroom is the entrance foyer and the dressing room in the mezzanine. The dancers can then dance as above and so below. The dance classroom only has a small area of mezzanine space on one side of the entire regular plan square.

Due to the limitation of climate and source, I used pine, elm, cypress, maple, oak and celtis sinensis in the north instead of Ni Zan’s original six types of trees in Jiangnan to form new Six Gentlemen of the water garden. The client suggested that turn the equipment room into a tearoom. Then the equipment had to be placed outside in two groups, one in the courtyard and the other one in the green space outside the gallery. The equipment was turned into an installation for the Monologue Art Museum.

The only Light in the Darkness

The courtyard was originally designed to have white dry-clay-stone floor. It could give the whole building a weightless feeling, which was successfully experimented in my White Upland project, creating an unreal illusion. I changed my mind when I designed the presentation of the Six Gentlemen, instead of pursuing a slightly sweet dream, I tried to express a somewhat melancholic mood after reflection.

In this regard, I decided to change the white into black, turning the accessible white square into a black pool that can be seen. This creates a new depth in the visual aspect. In this way, the white building is surrounded by a deep pool of silence, you stare at it while it stares at you. The surroundings suddenly become quiet. There is only the rustling of the wind blowing through the Six Gentlemen. However, I did not eliminate the landscape water system in the original courtyard that takes the meaning of Winding Stream Party.

The Black that Doesn’t Sink into the Dark

The water courtyard has quieted down. When I looked at the white building with a glass façade on the edge of the black pool in the rendering, a new familiarity arose, and the atmosphere of the place was too clichéd. So, I decided to light it up by turning the highest circular yoga room facade into a gradient of stained glass. With a touch of color in the thick ink, there comes a glittering glass fortress.

The glass fortress originally had only one floor, but the client insisted on having a changing area, and I could only set up a second floor for it to ensure the visual openness of the first floor. I also wanted the façade glass to maintain vertical continuity. I asked Lao Hu to hang the floor up to disconnect the floor and glass façade.

A Few Stars on the Border

The interior and exterior walls of the Monologue are made of glass, solid wall and flower wall. Independently or in combination, the three are continuous as shifting ink brushstrokes that create the varying boundary conditions of the museum. The flower wall is “written” down as the ink dries. To keep the 5m high flower wall safe as well as unfolded continuously, it was necessary to add structural columns every 3.8m behind the flower wall.

At the same time the roof panels are overhanging as the compression roof of the brick wall. The intricate flower brick is a GRC brick made of 3% steel fiber content using the premixed method, and there are two modules combined to form the façade pattern. The brick wall either runs double to frame a courtyard, or interfaces with glass or solid walls to forms a continuous 150-meter-long corridor to wrap around the Monologue Museum.

I divided a single wall in two to form a tearoom hidden behind the back wall of the corridor, just like the white gap we leave between the brushstrokes. It is an intimate and silent space, a corner where we hide our thoughts. I opened a long horizontal window along the height of the sight line to frame the sight as a scroll, where the six gentlemen were revealed. “Staring at each other while silent fell, remaining speechless only time can tell.” Source by Wutopia Lab. 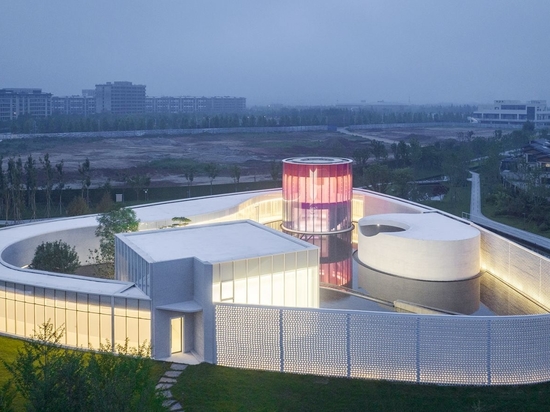 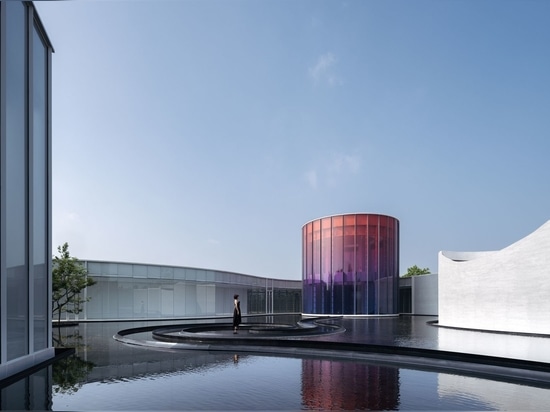 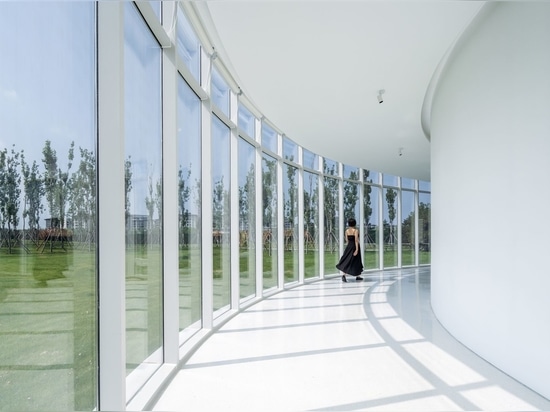 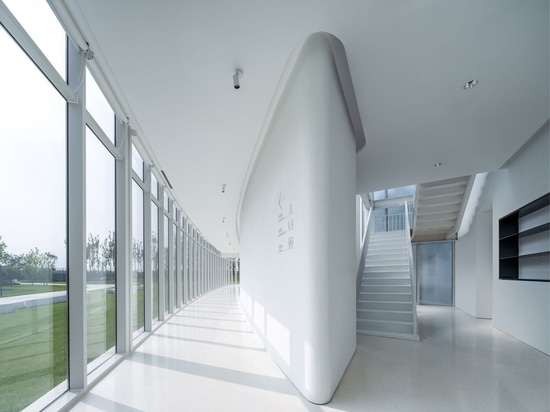 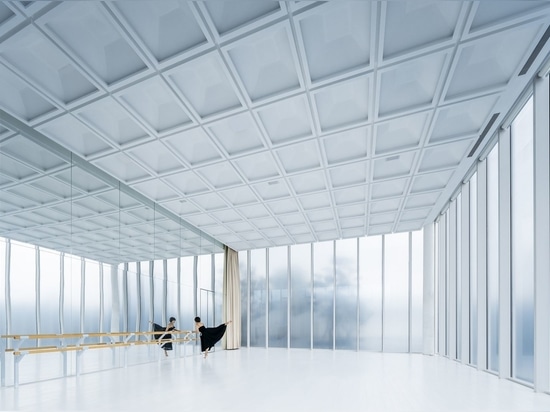