Overview. This is an inward-looking building, a building "hidden, introverted and introspective". To be exact, it is more like a building group, a building group simulating the structure of rural villages in Jiangnan or a modern garden building.

The project is located in Moganshan Town, Deqing County, Huzhou City. It is a new three-story building, which will be used as a homestay after completion. The north side of the project is the Phase I building of the B&B brand, the south side is adjacent to a three-story residential building, and the west side is partially close to a stream next to the main road. The southwest side of the project is linked to the site, and the higher the road goes to the north, the greater the height difference between the road and the site, with a height difference of nearly 4 meters in the northernmost part. On the southwest side of the site, there is a three-story residential building on the opposite side of the road. On the west side, there are mountain tea gardens and bamboo forests across the road. On the east side, there is a large area of bamboo forests and mountains, making the whole area a narrow valley between the two mountains.

Hidden. In general, this site has the disadvantages of low terrain, a large number of surrounding buildings, and a narrow vision. It also has the landscape advantages of adjacent streams, bamboo forests, and tea gardens. How to create a high-quality internal experience space in such a site without surrounding interference is the biggest difficulty. Therefore, we learned from the practice of traditional gardens, used a high wall to isolate the interior and exterior, and started to hide all spaces inward to create an internal world. The stone wall nearly four meters in height separates the project's interior and exterior. Part of the inner courtyard can be seen from the overhanging terrace on the entrance and creek. Several big trees emerged from the top of the stone wall. The high wall ensures that pedestrians on the road can hardly see the courtyard and the first floor, making people curious and eager to explore. At the same time, the stone wall also plays a role in reducing the mutual interference of internal and external noise.

Introverted. Although this is a newly-built building with an area of 140 and three floors, we do not want it to be presented in a more intimate and elegant way in the form of three - and four-floor unbalanced newly-built residential buildings that are ubiquitous in today's rural areas, but rather in a more cordial and elegant scale. The design makes the first floor hidden, and the second and third floors are divided into three small volumes, like three two-story houses. In proportion, it makes people feel friendly and comfortable, reflecting the introversion of the scale. We do not want it to be a "foreign object", but to be well integrated into the rural land to arouse people's memories of traditional Jiangnan dwellings. The "Li" of Qing Li implies pure black in ancient times. We added a layer of black painted anti-corrosion wood on the exterior wall as decoration, which can remind people of the weathered wooden facade of traditional Zhejiang mountain dwellings. Moreover, the grey stone wall presents a dark overall appearance. This steady temperament leaves a feeling of being deeply rooted in the soil for a long time, which reflects the introverted appearance.

Introspective. Because the site has many disadvantages, we used stone walls to isolate the interior and exterior to lead the landscape inward to the inner courtyard and the bamboo forest in the back mountain. This is a landscape inward building. We built four courtyards of different sizes so that the whole building could be completely enclosed by the courtyard space. All indoor public spaces and footpath streamlines were designed to interact with the courtyard. The west courtyard is a transitional courtyard that enters the building from the outside, which is the prelude. It is a long strip, which is the main landscape of the tatami area on the first floor; The courtyard on the north side has the largest scale and needs to provide space for outdoor activities in Phase I and Phase II, which is relatively relaxing; The courtyard on the south side has the smallest scale, which is arranged in combination with outdoor stairs; Buildings and mountains surround the east side to form an inner courtyard, which is the central courtyard of the whole project, different from the courtyard of traditional dwellings. On the first floor, an L-shaped window with a long strip was designed to face the courtyard. The wooden patio is accessible from the tea table and wine house doors. The corridor stairs on the second and third floors also surround the central courtyard, which is the second worship of the central courtyard. This technique is similar to the inner corridor arranged around the courtyard on the second floor of traditional residential buildings. The repeated observation of the central courtyard from the first floor to the third floor further enhances the "introspection" of the building. Except for several tea gardens facing the west, the windows of the guest rooms almost all face the bamboo forest behind the mountain, which also reflects "introspection". Because the main traffic flow lines on the second and third floors revolve around the central courtyard, the guest rooms rarely open windows towards the central courtyard, which can avoid mutual interference between vision and noise as far as possible, and ensure the privacy and experience of the guest rooms to the maximum extent.

Simulated village. The first floor of the whole building is a whole, which can be used as a public space of the homestay. It is a U-shaped plane to ensure the mutual connection and independence of different functional areas. The second and third floors of the building are divided into three individual blocks as guest rooms. The three small houses do not interfere with each other to ensure that the noise interference in each guest room is minimized. The overhanging eaves on the third floor are interlaced to create a lot of gray space, making each guestroom doorway form an independent semi-outdoor rest space. At the same time, the frame scenery of bamboo forests and distant mountains was designed. The block on the west side was designed to avoid the neighbors on the southwest side and better face the opposite tea garden. On the block, an angle deflection was designed to make the whole building more lively and rich. The three small houses simulate a traditional village. When you walk into this building, you will feel like you are walking into a village, and you will find it is an interesting and natural architectural community. Corridors and staircases are like interlaced lanes and stone steps in a mountain village, which are ambiguous grey spaces in the village. In the process of walking from the first-floor public space to your own room, you have unconsciously completed the communication and interaction with nature.

Transition. How do gardens construct and simulate a natural world? The essence of nature is changed, and the transition is the most basic unit of change. The transition of the courtyard footpath, building block, and vertical traffic together make a complex space experience of flow and change constructed. The transition from 2D to 3D makes the indoor and outdoor streamline of the whole building fold, bringing people the experience of climbing rockery in the garden and the interest of complex and interlaced streamlining. First of all, the transition is linear, so it is a whole. However, the transition is flowing and dislocated. Therefore, the spaces arranged on both sides are both related and separated from each other. The whole building block presents a three-dimensional turning streamline shape. From the plane to the vertical, the outdoor stairs and corridors are connected in series with many transitions to create a lot of different views and landscapes in the building, thus increasing the interest of the whole building.

Stone and Wood. In order to better integrate the whole building into the rural environment, we chose natural materials, including stone and wood, as the main base materials of the facade. The rubble cut by hand on the site is used to build the wall to make the whole building thick and stable to form the base of the whole building. The openings on the wall were used as entrances and terraces to interact with streams, breaking the monotony of large stone walls. The facade was decorated with black painted anti-corrosion wood. The texture of the wood can not only make the whole building warm and friendly but also highlight the modern simple style. The courtyard was made of many local natural pebbles, including the stone ridge wall at the boundary between the courtyard and the back bamboo forest and the pavement of the courtyard ground. The stone ridge of the central courtyard and the north courtyard used two sizes of stones and paving techniques to highlight the particularity of the central courtyard. In addition, the method of manual paving with small pebbles is called "row skin" masonry by local masons, which finally presents exquisite horizontal texture. Large pebbles were used in the bamboo forest facing back in the north courtyard and the two stone ridge walls in Phase I, and the excavator was used for laying. The gap was filled with mud, reflecting its rudeness and nature. 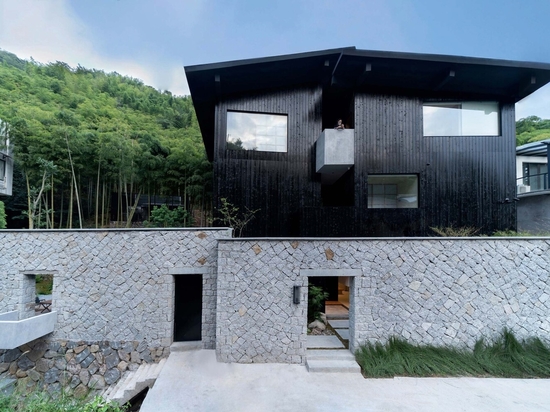 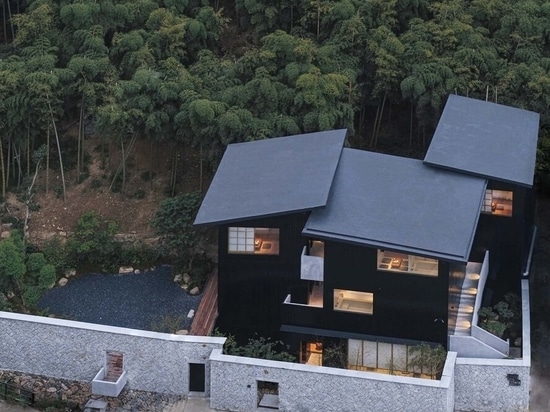 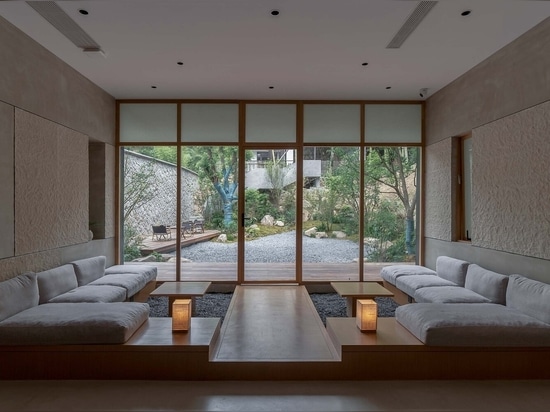 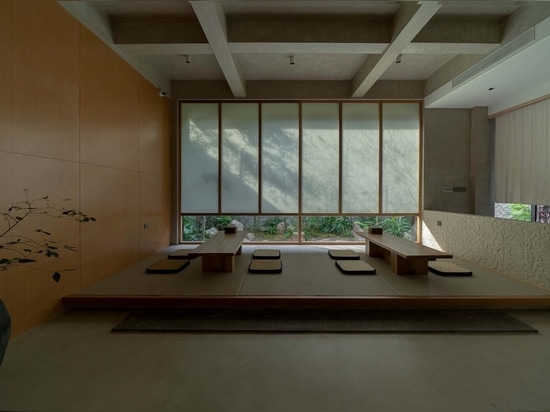 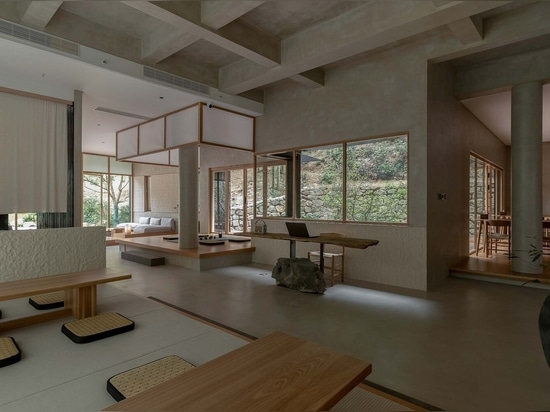 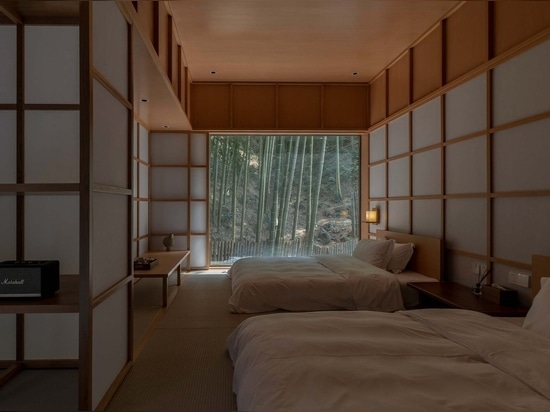